This time we will take a specific promo and deal with its story. The promo is a 1961 AMT Ford Galaxie Sunliner Convertible.

Two days ago I was in my garage and for whatever reason I pulled out the promo mailer box that has been in my supplies cabinet for years, perhaps decades.  It had weight. Hmm? I thought it was an empty box for years. Well, I opened it up and surprise, surprise, inside was a gleaming Monte Carlo Red 1961 Ford Sunliner convertible.

Yesterday, I realized why it was in there. It has an inner wheel hub that is broken. At first it was, "Someday I will fix that." That deteriorated into, "There's nothing in that box."

Here are three things to think about with this particular example.

One, the full-sized Ford promos were made of two kinds of plastics. The early production promos were made in the older plastic that warped. The early ones were made for the Ford dealers to be in showrooms on introduction day of "next year's model." They were made in many more colors than the later issues. The later issues were made of harder, non-warping plastic and came in fewer colors than the early ones. The finish on the older ones was much more glossy than with the later versions. 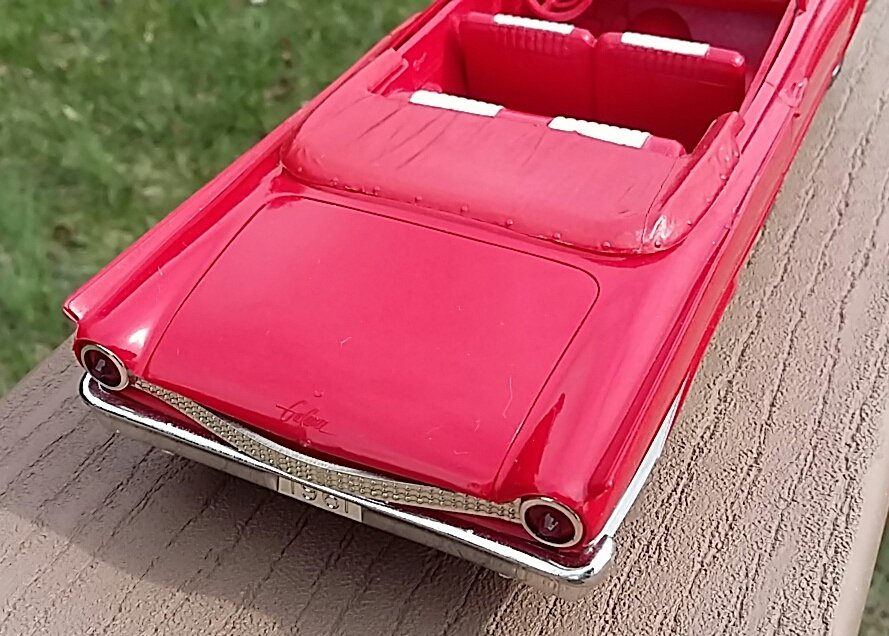 One issue related to shrink-warp on the early 1961 Fords was the rear chrome panel between the tail lights. The chrome parts on both early and late promos were made of non-warping plastic. Everything was in agreement with that panel on the later versions. But, on the older versions here is what happened. As the car shrank and the center panel didn't, something had to bend or break. In this case it was that chrome panel that was squeezed and it had only one way to go and that was outward towards the back of the car. This issue can be repaired but it is not easy to make this repair and make it look really good. 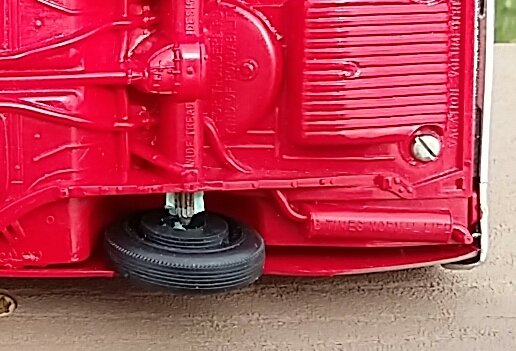 A proclivity of the wheel hubs to break on the backside is a negative on both early and late cars. The earlier cars normally had the bodies and chassis glued together at the rocker panels with some amazingly tough glue. One has to risk damaging that area to fix the wheels. Don't do it. 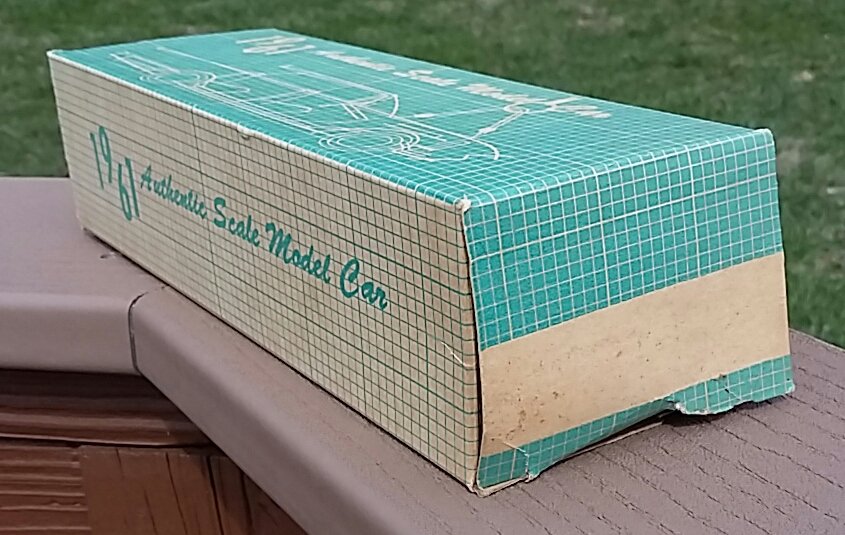 This promo (Stock# 1124) has two boxes. The outer box is a mailer box and likely was a result of the free promo offered in the "1961 Ford Buyer's Guide." The mailer box was stamped with the car color which is why we find the interior boxed not stamped at all.

Even though many, many of these red Ford convertibles were made, not that many survived without problems. The most common problem to be found on these cars is a windshield header broken with parts missing. Too many people think that they should pick these cars up by the windshield headers. Caution your friends who want to hold convertibles the wrong way. If they do not listen to you, smite them.

This promo is for sale currently listed in the Full-Size Ford Category.